By: Jerome
In: Amidst the Flowers, Frame Works?, Uncategorized
With: 0 Comments 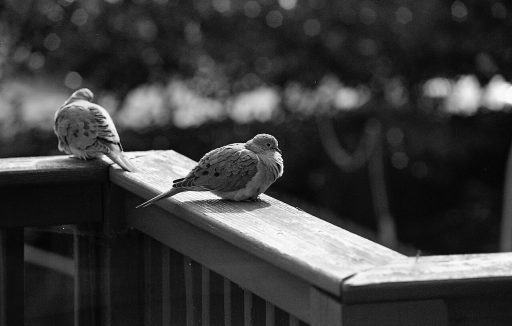 Background: It seems that 2022 is the year for birds at our house. I started putting out bird seed in winter, and it quickly attracted regulars. By April, there were four nesting families—two sets of house finches at the apex of the eaves on the front and west side of the house, a pair of robins on the deck, and a pair of doves just outside my wife’s home office window.

Undoubtedly, easy access to food played a role in our becoming a mini-sanctuary. However, the garden has had a part since 2014. Watching the behavior of the various species that visit for food has been interesting. The robins don’t eat bird seed; instead, they monitor the yard, and at the first sign of a sprinkler or after a rain, they patrol the mulch and pastureland of the backyard. The finches eat ravenously, always stopping for a few minutes to eat their fill. Like the cardinals, however, they bolt at any sign of movement from inside the house.

The doves are different. They come to eat but stay and relax, sunning themselves and generally taking a break from life. The deck is open, and I assume they have few natural enemies because they make no attempt to hide. Movements that would send other birds into panicked flight don’t seem to bother the doves. They sat still while I shot multiple images. Unfortunately, it was late afternoon, and the sun was low in the sky, so I could not use a smaller aperture for a greater depth of field. I have no idea why the doves are less skittish around people than the other birds. My best guess is they have watched my wife through the window from their nest–maybe 15 feet from her desk– and realized humans are not a threat.

Frame Works?  Yes! Feeding the birds and watching them respond by tarrying a while after eating felt as if they decided to stay and see how I was doing. They look so relaxed and satisfied—not on alert but comfortable–at home. Their peaceful demeanor, which I both marveled at and envied, helped to take my mind off my woes. A small thing, perhaps, but I have come to appreciate the days of small things.

Earth, Sun, Film is an exploration of gardening and photography.  For the backstory, read this.

For more about site channels and the author, go to the About page.